A Map of Guadeloupe Will Help You Navigate These Beautiful Isalands

There are many people looking for a map of Guadeloupe.

You will find not only Guadeloupe maps, but also a detailed description of the geography of Guadeloupe here.

Guadeloupe is an archipelago (group of islands) in the Leeward islands of the Lesser Antilles located in the eastern Caribbean Sea. It is located just southeast of Puerto Rico. The total land area of these Caribbean islands is 629 square miles (roughly 10 times the size of Washington, DC); however, the two largest islands by far are Grande-Terre in the east and Basse-Terre in the west. These two islands burst through the water and combine to form the wings of a majestic and colorful butterfly. The two islands are separated by a narrow stretch of sea often referred to as the Riviere Salee, or "Salt River."

Basse-Terre is a mountainous island with green and abundant flora. It was formed primarily from volcanic activity and is home to the active volcano, Soufriere. The elevation of Soufriere is about 4,812 feet above sea level. The city of Basse-Terre is the capital of Guadeloupe and is located on the west coast of the island.

In contrast, Grande-Terre is flat and dry when compared to its sister to the west. It has a wealth of beaches and coral reefs for tourists to enjoy. It is a limestone formation, and is the only non-volcanic island of the group. It is also home to both the major airport on the island and its economic and cultural center of Pointe-à-Pitre.

As you can see on the maps of Guadeloupe below, there are other islands that also make up the geography of Guadeloupe. There is a small group of islands directly south of Basse-Terre called the Iles des Saintes (Terre de Haut and Terre de Basare the largest of these tiny islands).

the Iles des Saintes are flanked on their east by Marie-Galante island (directly south of Grande-Terre, and the largest of the ancillary islands). As you make your way counter-clockwise around Grande-Terre, you pass the small, uninhabited island of Petite-Terre to the southeast, and finally reach La Désirade on the east side of Grande-Terre. Due to its location as the easternmost island in this archipelago, La Désirade is the only island on the map of Guadeloupe completely surround by the Atlantic Ocean. Combined, the total coastline of the Guadeloupe islands is approximately 190 miles.

Check out each map of Guadeloupe for more information. 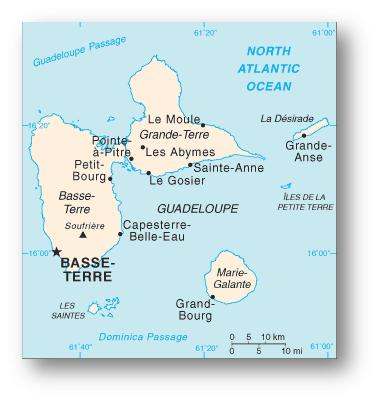