The Jamaica weather forecast calls for amazing temperatures with an average between 80°F (26.7°C) and 86°F (30°C) in the coastal regions all year around.

You can see the current weather in Jamaica below.

As is common in the Caribbean, the days come with plenty of sun. And, in the Caribbean islands, with sun comes plenty of warmth. Jamaica is below the tropic of cancer, but situated far enough north of the equator that the temperatures are still bearable. Theses sun fueled temperatures are cooled by the trade winds. The locals refer to these winds as the "doctor breeze" because they are sure to cure what ails you on a hot day. Let me tell you, the doctor is a welcome visitor when lying on the beach.

Is there a lot of Rainy Weather in Jamaica?

There are two rainy seasons in the Jamaica weather forecast. The first occurs between May and June, with the second in October and November. The average rainfall in Jamaica is about 78 inches (307 mm) or so per year; however, this can vary significantly from region to region.

The northeastern and eastern (windward) coast of Jamaica receives the most rain. Parts of the Blue Mountains in the Portland Parish (on the eastern side of this Caribbean island) see up to 300 inches of rain per year. The amount of precipitation falls as you move westward, and the southwestern coast of Jamaica is semi-barren and receives sparse amounts of rain. When you do get an occasional shower in Jamaica, they are usually over pretty quickly and then give way to the sun.

For those familiar with the various "resort" cities in Jamaica, Ochos Rios gets the most rain, followed by Montego Bay (MoBay), and Negril. Don't let that mislead you, however. All three of those cities are quite a ways from the east coast of Jamaica and all have exceptional weather year round.

Jamaica weather is rarely interrupted with hurricanes, even though it is in hurricane alley. Officially, hurricane season runs from June to November, but the greatest likelihood of experiencing one of these massive storms is in August or September. Most often, the effects of a hurricane are seen by the rains that accompany a hurricane's perimeter.

Weather in Jamaica sees a hurricane (brushed or direct hit) only once every 4.12 years; however, they experience a direct hit (a hurricane passing within 40 miles) once every 11 years and 4 months. In the last 137 years, Jamaican life slowed for a hurricane passing within 60 miles only 34 times. The most destructive hurricanes to hit the island were Hurricane Gilbert in September 1998 and Hurricane Ivan in September 2004. The last experience with a hurricane in the Jamaica weather forecast was a brush with Hurricane Dean in 2007.

As you can see, the chance of your Caribbean Island adventure being upset by rain in the Jamaica weather forecast is relatively slim, so "No problems, mon." 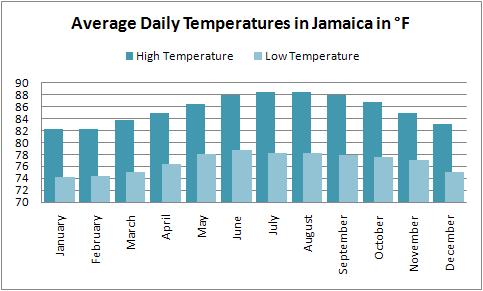 As the locals would say, the weather in Jamaica is irie, mon!